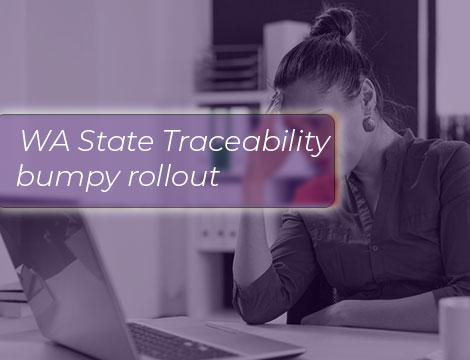 Washington state is rolling out its own marijuana seed-to-sale traceability system after having relied on the private sector for years, but so far, the government-run platform’s debut this month has been less than smooth.

Business owners say the new system is riddled with bugs and glitches, costing companies thousands of dollars in lost time and extra employee hours to comply – all when the industry is gearing up for the Christmas shopping rush.ADVERTISEMENT

The bumpy rollout underscores the difficulties of developing from scratch a key regulatory platform to oversee the recreational cannabis supply chain, from seed to sale.

Washington is believed to be among the first states to launch such a system with the aim of simplifying the process.

“The idea that this was all magically going to come together in the matter of a few months was just a pipe dream,” said Bob Ramstad, owner of Seattle-based OZ. Recreational Cannabis.

“Doing all of this during the holidays is just downright cruel.”

After more than five years of using a third-party vendor, the state’s Liquor and Cannabis Board (LCB) introduced the new Cannabis Central Reporting System (CCRS) on Dec. 7 in order to move away from Akerna’s Leaf Data System.

Marijuana companies in Washington state are now required to submit weekly reports via the CCRS instead of Leaf, which will be unavailable after Dec. 18.

In a recent news release, the LCB said: “As with any new system, there can be challenges that arise when using a new technical resource.”

The agency added that it “appreciates the patience and partnerships happening now as employees and licensees move forward on the new reporting system.”

Such assurances, however, don’t appear to have allayed industry concerns.

“The new system isn’t working at all,” Ramstad said.

He tried to do an initial Monday upload, consisting of a set of seven files, and received errors on every line for four of the files.

“One retailer I talked to said that it would cost them $5,000 to $20,000 per month in additional staff required for the extra work for receiving and fixing errors,” Ramstad said.

According to Ramstad, some processors have stopped shipping products entirely because their third-party software isn’t working with the new code that the state added for the CCRS.

“Everything takes longer, there are more mistakes, processes have to be repeated, we’re all stuck waiting for the LCB system to get online.”

He conservatively estimated that each cannabis business employee working on this is wasting at least two hours per day.

Busby worked alongside Micah Sherman, owner of producer/processor Raven Grass in Olympia, to form a group of third-party software integrators called the Washington Cannabis Integrators Alliance (WCIA) with the mission, in part, to develop a software workaround that reduces the need for manual data entry to comply with the new system.

“Manual entry for transfers requires a lot of time,” Sherman said when asked if this new schema was costing businesses money.

According to Sherman, the CCRS is ostensibly working, but “with quite a lot of bugs.”

The bugs are making it difficult to know if traceability-data uploads were successful or not, he said.

“Software integrators have spent untold time on this and still continue to do so,” Sherman added.

“The industry is very dependent on them at this point, as a result of the process that was conducted by the LCB.”

In response to a query from an industry official, Jim Morgan, chief financial officer for the LCB, wrote in an email that the CCRS is centered around meeting the agency’s regulatory obligations – rather than helping companies conduct business.

It also is intended to permit the state to meet its own regulatory obligations, including monitoring for the possible diversion of legal products to the underground market.

“It is not designed to engage in or facilitate the flow of transactions either within a licensee’s business, or between licensees,” Morgan wrote.

Reports similar to those created with the Leaf system are being developed and expected to meet the same needs, he added.

As one example of a hiccup, despite the efforts of the third-party integrators, the automated solution the WCIA developed could not bypass the so-called CAPTCHA required for users to log into the state’s website, according to Shawn Denae Wagenseller, a marijuana grower in Arlington.

That prevented automation of the process and forced licensees to manually enter their sold or purchased orders, creating the opportunity for human error.

“In the land of Microsoft, this is an embarrassing development,” Wagenseller said, referring to the software giant’s home state.

Wagenseller added that one her fellow members of the Washington Sun and Craft Growers Association estimated that manual inputting into the CCRS will cost their firm more than $5,000 in employee hours at $15 an hour to type in or copy and paste sales-transfer data.

In a written statement, Vicki Christophersen, executive director of the Washington CannaBusiness Association, mentioned the same problem with CAPTCHA.

“We are hearing from members that there are significant impacts due to the time and labor it takes – 3-4 minutes each, often hundreds to upload per week,” she wrote.

When the state first announced the switch would be at the end of 2021, even though the Leaf contract remained valid until June 2022, Wagenseller said many in the industry asked for more time to allow the integrators to rebuild their software. But the LCB declined.

“The industry has certainly been asking for a better workflow system that does not impede commerce, but it’s like asking to borrow the car on weekends and they gave us the keys on Monday,” Wagenseller said.

“It would have been smart to roll this out in phases and take more time,” Ramstad said.

“We had reports from testing that people had massive errors when uploading to CCRS, yet they went live with this situation, so it is what it is.

“They will patch it and fix it, and eventually we’ll have something that works.”

Bart Schaneman can be reached at bart.schaneman@mjbizdaily.com.